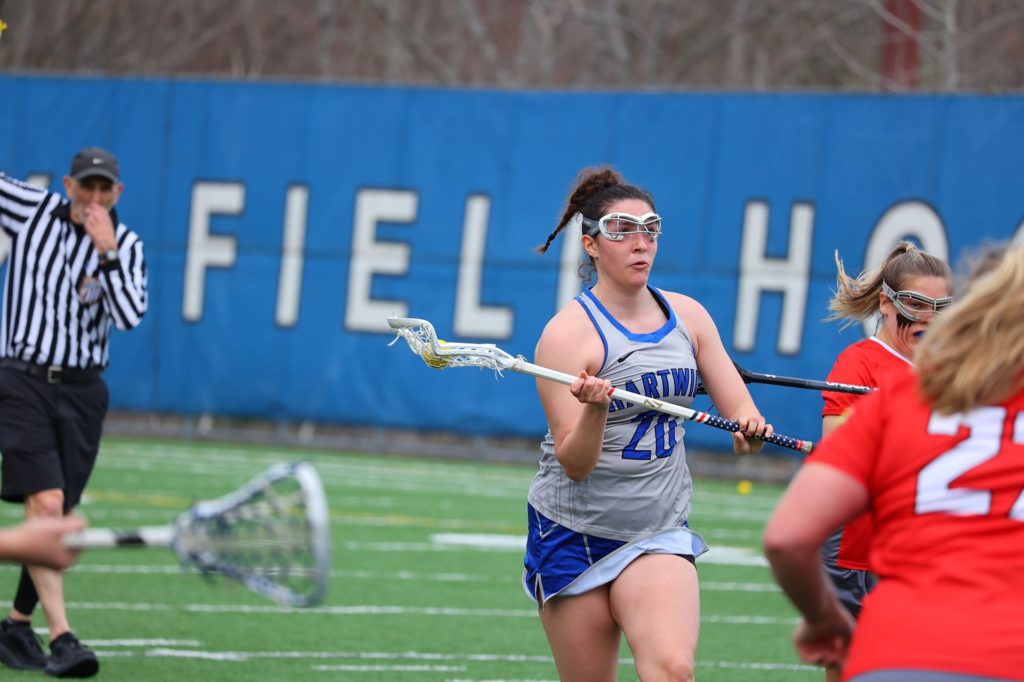 Kristen Vaccarelli hasn’t wasted any time in making her impact felt as a Hartwick freshman.

The Team 91 2021 alum by way of Half Hollow Hills West was front and center in the Hawks’ 20-11 win over Alfred. She posted a whopping six goals and one assist to lead the way for Hartwick… and it probably wasn’t even the most impressive part of her stat line.

Vaccarelli completely dominated draw controls, coming up with a dozen to go with another dozen ground balls. It came on the heels of a two-goal, five-draw control, one-ground ball day in a 15-6 loss to Utica. Vaccarelli leads the team this season in goals (25), points (31), ground balls (30) and draw controls (54).

’17 Amanda Ehrhart (Connetquot) was a force for Kean in its blowout win. She dished out five assists to go with a goal, four ground balls and a caused turnover after scoring twice and setting up three more goals against Drew.

’19 Anna Schipf (Babylon) gave WestConn a shot to win in overtime with a 13-save, six-ground ball, two-caused turnover effort against Coast Guard. She then picked up a ground ball in very light duty before ceding the cage to her backup in the rout against Castleton.

’20 Lauren Kenny (Riverhead) dished out an assist to help the Seawolves cruise.

’17 Hailey Duchnowski (Miller Place) was a rock in the Sharks’ cage with 10 saves, nine ground balls and a caused turnover. ’18 Sydney Marzano (Smithtown East) dislodged a pair of turnovers for LIU, which also got a draw control from ’20 Brianna Tribble (Longwood).

’19 Cassidy Evans (Glenn) picked up a ground ball for the Bearcats.

’17 Caitlin Morrow (Massapequa) went off for a career-high five goals in the Bald Eagles’ win over Gannon. She also helped Lock Haven to a win over Edinboro with a draw control.

’21 Josie Lettieri (St. Anthony’s) fueled the rout of Nyack with a pair of goals to go along with four ground balls, three draw controls and a caused turnover. She then pocketed a goal against STA.

’17 Haley Rose (Shoreham-Wading River) was a defensive force for the Greyhounds with two caused turnovers in the win and three ground balls and a caused turnover against Le Moyne.

’18 Mackenzie DeMott (Half Hollow Hills West) celebrated Senior Day in style, firing home a hat trick to go with an assist and a caused turnover as SCAD Savannah rolled.

’19 Sydney Passaro (Center Moriches) handed out a helper to push Keiser past Life.