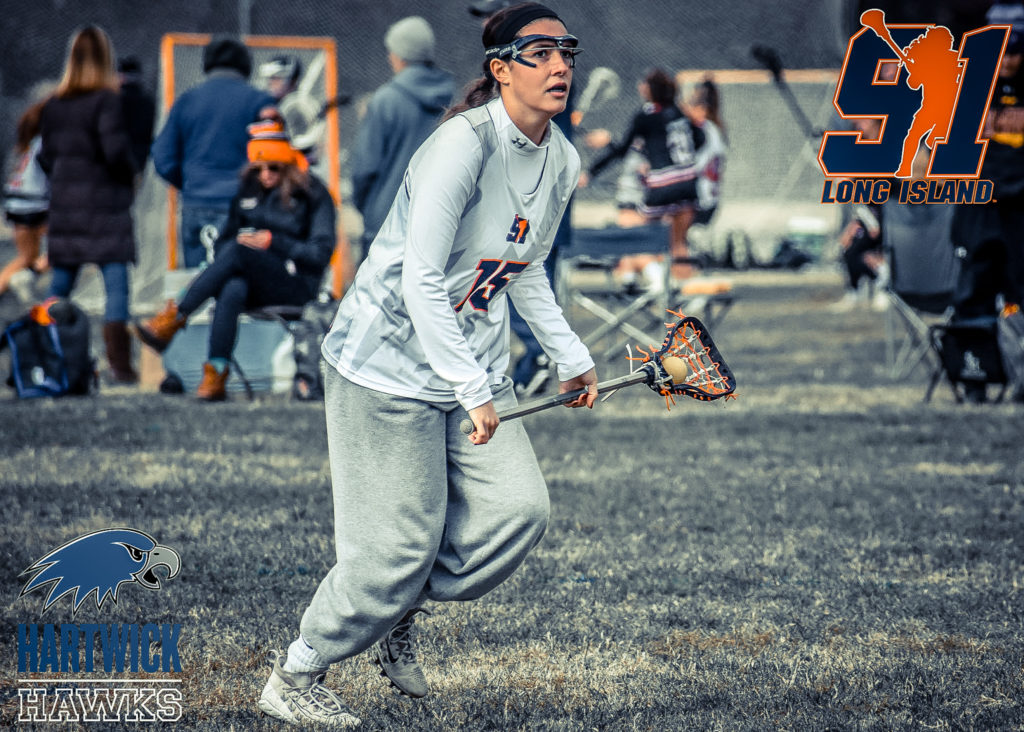 It wasn’t long into Sam Tilts‘ coaching career that she realized that she had something special in Kristen Vaccarelli (highlights).

The Team 91 2021 midfielder by way of Half Hollow Hills West didn’t take long to endear herself to Tilts, who noticed that Vaccarelli was always flying around the field to make plays. It’s when Tilts knew that Vaccarelli could be something special both at the high school and college levels.

“Kristen started playing for me in fifth grade while I was a sophomore in college,” Tilts said. “Every summer, I’d watch her outrun and tower over everyone else on the field. She’s always put 100 percent into everything that she’s done. She loves this sport more than anything and will do everything in her power to be the best that she can.”

On the flip side, Vaccarelli acknowledges that she’s turned into a completely different player under Tilts’ tutelage, and as a result, is ready to compete in college. She recently cemented her collegiate future by committing to Hartwick, becoming only the second Team 91 girl to commit to the Hawks after ’13 alum Lauren Rosenberg. She was the eighth Team 91 ’21 to commit.

“Sam has been there for me since the start, and I’ve learned so much from her and the other coaches,” Vaccarelli said. “I’ve definitely seen a huge improvement in a lot of my skills, and I feel like it’s really important to have had a coach stick with me for a really long time.”

A high IQ, aggressive and unselfish player, Vaccarelli will look to make a sizeable impact for the Hawks. More importantly, though, she felt at home when she made it to campus for a visit, immediately feeling a connection to everything that the school offered.

“When I visited, I just fell in love with the scenery and everything about it,” Vaccarelli said. “I loved the program and it felt like a really good fit for me. I loved the school’s outdoorsy kind of feel since it’s up in the mountains and everything is grass. I’m interested in occupational therapy and they have an awesome four-and-one program where you do one year of grad school in Albany. That was a big one for me. I’ve taken a couple classes in sports medicine, CPR and first aid, and I’ve started to like that arena and I decided that I loved working with other people.”

Vaccarelli had a couple of high-quality options at her disposal, but Hartwick not only set itself apart academically and with its location, but a team that she sees as being on the precipice of doing great things. That total combination made Hartwick impossible for her to pass up.

“When I was in 10th grade, my parents asked if I wanted to play in college and it was such a big part of my life that I really wanted to do it,” Vaccarelli said. “I focused more on my skill and agility. I had a rebounder and a net in the backyard and I improved my skills every day so I could get to that point. Then, when I started researching schools, I found that program and thought it was the right thing to do. When it all added up, I felt like it was the perfect place for me to play high-level lacrosse and pursue occupational therapy at the same time.”

Vaccarelli has shown that by immediately giving back to Team 91 by volunteering to coach with the 2024 Crossfire team, led by Tilts. That kind of selflessness makes her the ideal teammate, something that she’s always prided herself on, and it’s a major reason why she’ll slot in perfectly with Hartwick.

“Watching her work with freshmen has been so rewarding for me as a coach,” Tilts said. “Hearing her give kids the feedback I’ve given her and then some is so fulfilling. I am so unbelievably proud of Krissy, and I wish nothing but success for her in her lacrosse career.”

Vaccarelli’s track record indicates that success is likely in the cards yet again.