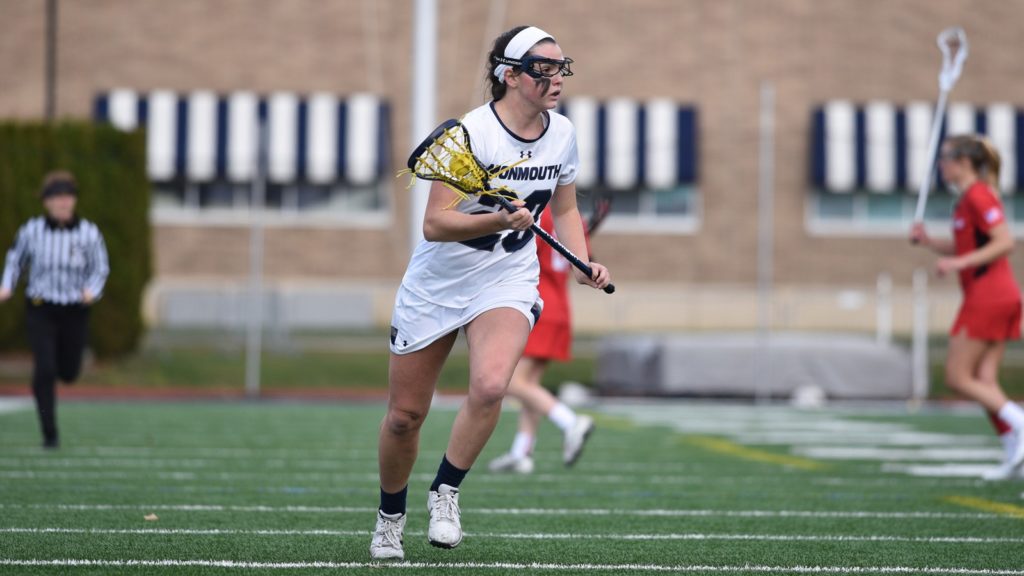 Ally Turturro made sure that it was a great week for Monmouth.

The Team 91 2016 alumna by way of Miller Place was a veritable scoring machine for the Hawks, putting in five goals in a 16-12 win over Rutgers and following it up with two more goals in a 17-13 triumph over Holy Cross.

It wasn’t just about the goals, either. Turturro grabbed six draw controls and three ground balls against the Scarlet Knights before securing seven draw controls in the win over the Crusaders.

Heldberg also added a ground ball for the Blue Jays, and it marked her fifth straight multi-goal game and third hat trick in the past five games. Earlier in the week, she popped off for two goals and an assist, to go along with two ground balls and a caused turnover.

’17 Shannon Savage (Kings Park) pocketed a goal to go with a ground ball and a draw control to fuel the Bobcats’ win over the Hawks.

’18 Hailey Duchnowski (Miller Place) denied eight shots sent her way and had a pair of ground balls for the Sharks.

’17 Chelsea Witteck (Smithtown West) kept the Lions close with the Owls by tallying a hat trick to go with a ground ball, then caused a turnover against the Big Red.

’17 Kayla Kosubinsky (Smithtown West) paced a balanced attack in a pair of Spartan wins with a goal against Concordia, followed by a goal and two assists to complete the sweep.

’16 Allison Conn (Floyd) scored a goal and caused a turnover as Queens knocked off a top-10 foe in Florid Southern. She added a pair of goals, three ground balls and a caused turnover in the rout of Coker. ’17 Lexi Willets (Floyd) had a caused turnover and a ground ball, then matched that stat line and added three draw controls in the shutout.

’17 Brittany Iamele (Rocky Point) was lights-out in relief in a pummeling of top-1o team Regis, making 10 saves on 11 shots as the Mocs rolled.

’17 Sarah Schaefer (Rocky Point) paced a stingy defensive effort – one that held Chowan off the board for the first half – with a caused turnover.

’17 Caitlin Morrow (Massapequa) led the charge for the Bald Eagles with two goals and an assist against Millersville, then put forth a strong four-goal, one-assist, one-ground ball, one-caused turnover day against Shippensburg.

’19 Lindsay Guzzetta (East Islip) tallied her first career hat trick to go along with a dozen draw controls in the win over Norwich, then followed it up with a goal, three draw controls, a caused turnover and a ground ball to keep the Cardinals perfect.

’19 Anna Schipf (Babylon) made her debut in relief for West Conn, making four saves in goal.