Welcome back to “In The Crease” with Team 91 Long Island. Spring is in full swing and all of our players are in lacrosse mode. From the younger groups at our practice fields at Farmingdale State College, to our high school talent that are in the heart of their seasons and of course all our college players starting to compete in conference play. It is always a treat this time of year to be a part of Team 91, as we see our players getting featured on Top 100 watch lists, getting mentioned on the local news outlets weekly, breaking school records, making highlight reel plays, and accomplishing every kids dream of making it on Sportscenter Top 10 plays. We are excited to release Volume 3 of “In The Crease” with all of you. This week we feature two player spotlights on the girls side as well as high school and college mid-season highlights. Thanks for taking the time to stay up to date with 91 news. Hope you Enjoy!

If you have news or mention-worthy news, please send copy to info@team91lacrosse.com.

After anything but a slow start to the Friars season they went 2-0 with dominating wins each by more than 10 goals. The girls recently traveled down to Maryland in a matchup between top 5 nationally ranked teams in #3 McDonogh and #4 St. Anthony's, according to USA Lacrosse Magazine. After a competitive game, the Friars got handed their first loss 13-6. When asked about this season, Cailey Lopez (2022 Orange), one of the key players for St. Anthony’s said, “We’re looking forward to competing at a high level the rest of this season and work towards taking home another league championship”. St. Anthony’s is carried by four 2022 91 players, Cailey Lopez (2022 Orange), Anita DiBari (2022 Orange), Amanda Iglio (2022 Rapid Fire), Erin Boyd (2022 Rapid Fire) and one 2023 Bandit Ashleigh Wetzel. Lets see if the Friars can keep the net moving as they enter the heat of their schedule to stay one of the top teams on Long Island.

This is a team carried by Team 91 seniors who have played with each other for years. The Tornadoes have four 2022 Orange players that have put together stats just under halfway through the season. Stony Brook commit Francesca Viteritti keeps the defense in check between the pipes with a 52% save percentage with 51 saves. On the attack leading the team in points is senior Emma Flynn with 18 points. Emma is accompanied by goal scorers Molly Whisler, Faye Junge and 2024 Orange player Kiera Medina. The girls look to catch their stride in the coming week as they face conference rivals Middle Country, Mount Sinai and Shoreham Wading River. 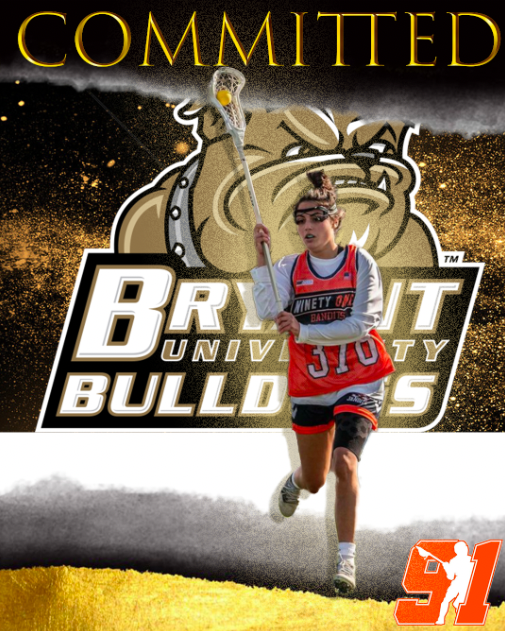 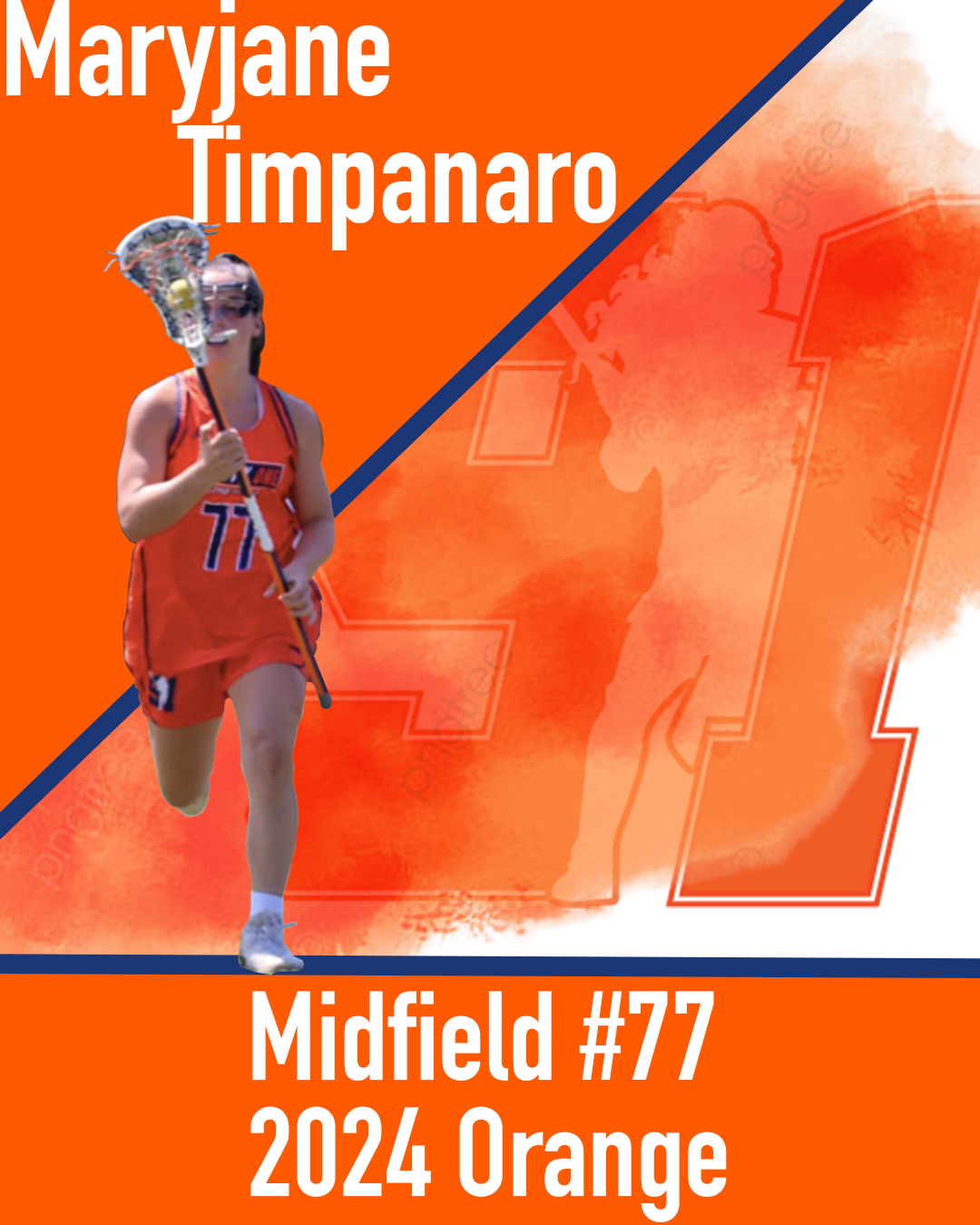 It's another week of Team 91 alumni putting up numbers at the next level. Stay up to date with weekly recaps on our website, highlighting alumni stats at all divisions. Follow the link below to get an in depth look at what our players are accomplishing week in and week out.

Next 2 Games: Chaminade|St. John the Baptist

Going into April the Cyclones are the #1 team in Nassau with a perfect 5-0 record. With wins over Syosset, Massapequa and Wantagh, they have shown that they can compete with the best and have the poise to finish out a game with all three contests coming down to one goal. Southside is led by Loyola commit Brad West (2022 Smash) tallying 7 goals, 4 assists and the brother duo, Jack Mayerhofer (2023 Warriors) with 4 goals, 2 assists and Ryan Mayerhofer (2023 Warriors) who leads the team with 9 goals, 5 assists. All three players are not afraid to have the ball in their stick in crunch time, which has shown to be a problem for the rest of Nassau. The Cyclones have a stacked remaining schedule as they look to stay in the win column.

After a tough 7-5 loss to start the season against one of the top teams in Massapequa, the Phantoms went on a tear, putting up more than 14 goals in 3 straight wins over West Babylon, Miller Place and Eastport South Manor. Bayport Blue Point recently traveled to rival Shoreham Wading River and dropped their second game of the year to a team they will potentially see in the playoffs down the line. With the roster stacked top to bottom with 91 talent this is a team that can make a run when they are clicking. Starting with the senior leaders, Johns Hopkins commit Jameson Smith (2022 Smash) leads the team in points with 18 and UMass commit Gavin Locascio (2022 Smash). Juniors who have stepped into key roles this season are PJ Shanahan (2023 Warriors) with 17 points on the offensive side of the ball and Siena commit Eric Grahn (2023 Bandits) between the pipes. Two sophomores and members of our 2024 Wolfpack, Ben Morris tallying 13 points and Brady Smith who has 6 points have shown they can contribute for the Phantoms early in the season. 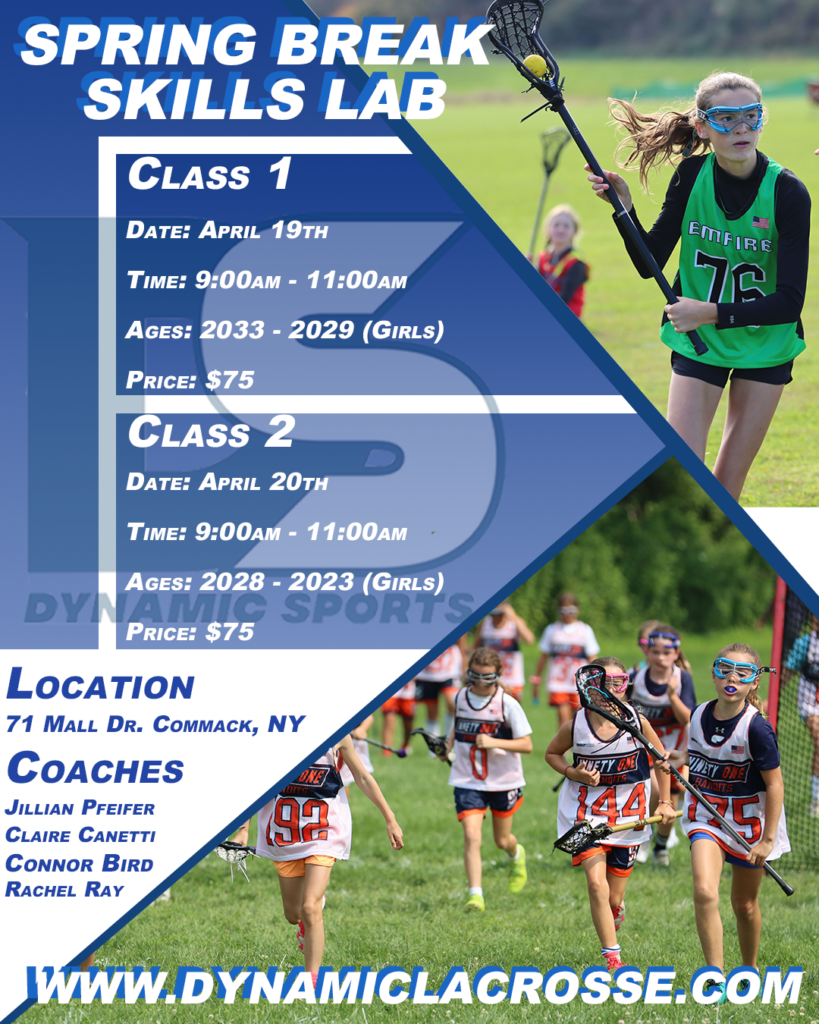 If you’re looking to improve your individual lacrosse skills, have fun and meet new friends, then the best thing you can do is attend the Spring Break Skills Lab at the Dynamic Training Center! The Lab is geared to players of all ability levels from experienced to beginners. We will build individual skill development to increase their fundamentals and lacrosse IQ through competition, drills and games. 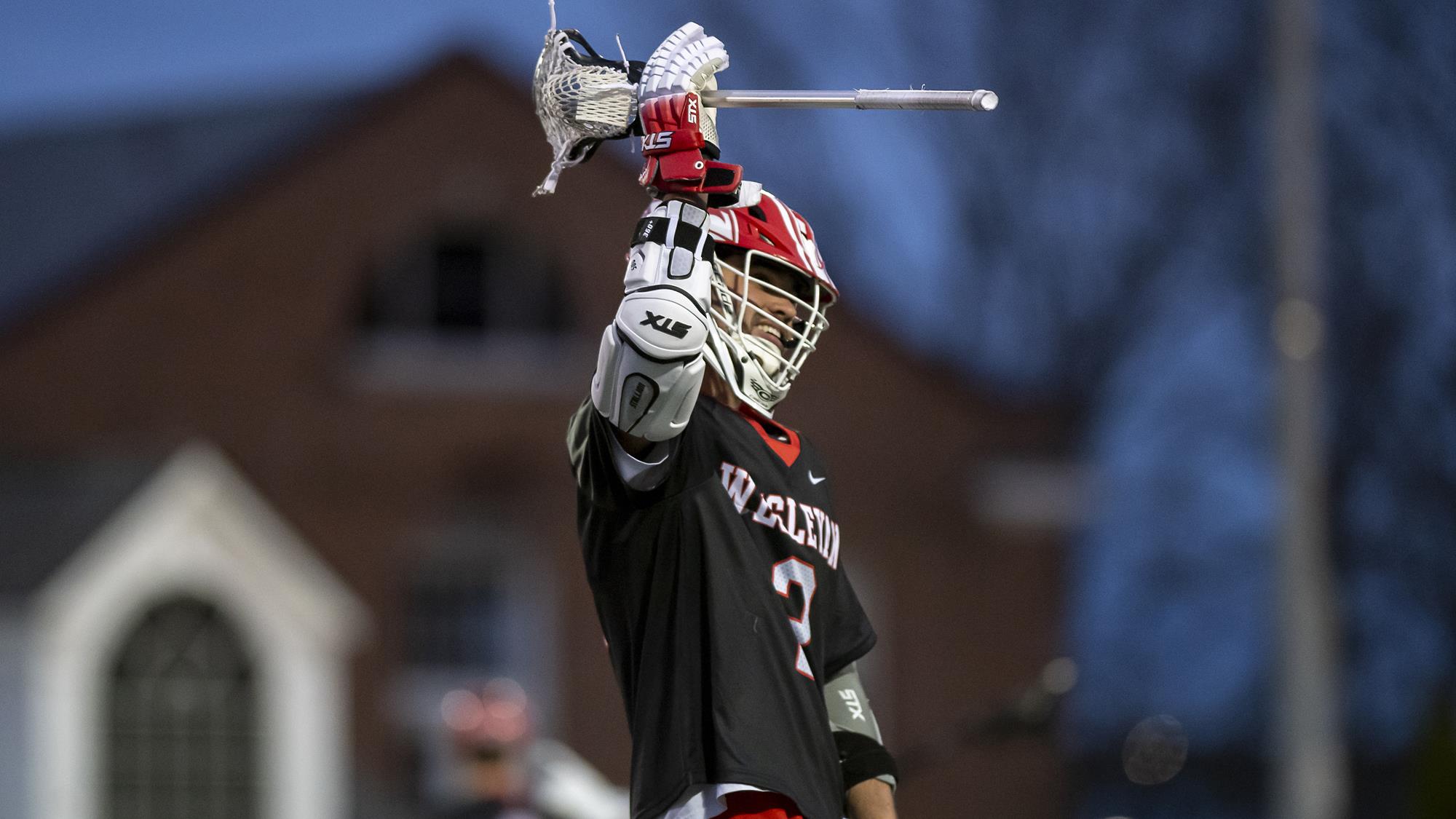 Kristen Vaccarelli hasn’t wasted any time in making her impact felt as a Hartwick freshman.

The Team 91 2021 alum by way of Half Hollow Hills West was front and center in the Hawks’ 20-11 win over Alfred. She posted a whopping six goals and one assist to lead the way for Hartwick… and it probably wasn’t even the most impressive part of her stat line.

Vaccarelli completely dominated draw controls, coming up with a dozen to go with another dozen ground balls. It came on the heels of a two-goal, five-draw control, one-ground ball day in a 15-6 loss to Utica. Vaccarelli leads the team this season in goals (25), points (31), ground balls (30) and draw controls (54).

What a week it was for Jake Sexton and Wesleyan.

Sexton, a Team 91 2018 product by way of Chaminade, posted five goals and five assists to help the Cardinals knock off a pair of ranked NESCAC rivals in Amherst and Middlebury.

Sexton put forth a three-goal, four-assist, two-ground ball, one-caused turnover performance in Wesleyan’s 21-14 rout of Amherst. He followed it up with two goals and a helper, as well as a caused turnover, as the Cardinals nipped Middlebury 12-11.

Sexton has been a force for Wesleyan all season long, tallying 27 goals, 21 assists and 48 points. All three totals are good for second on the Cardinals, who hold an 8-2 record. 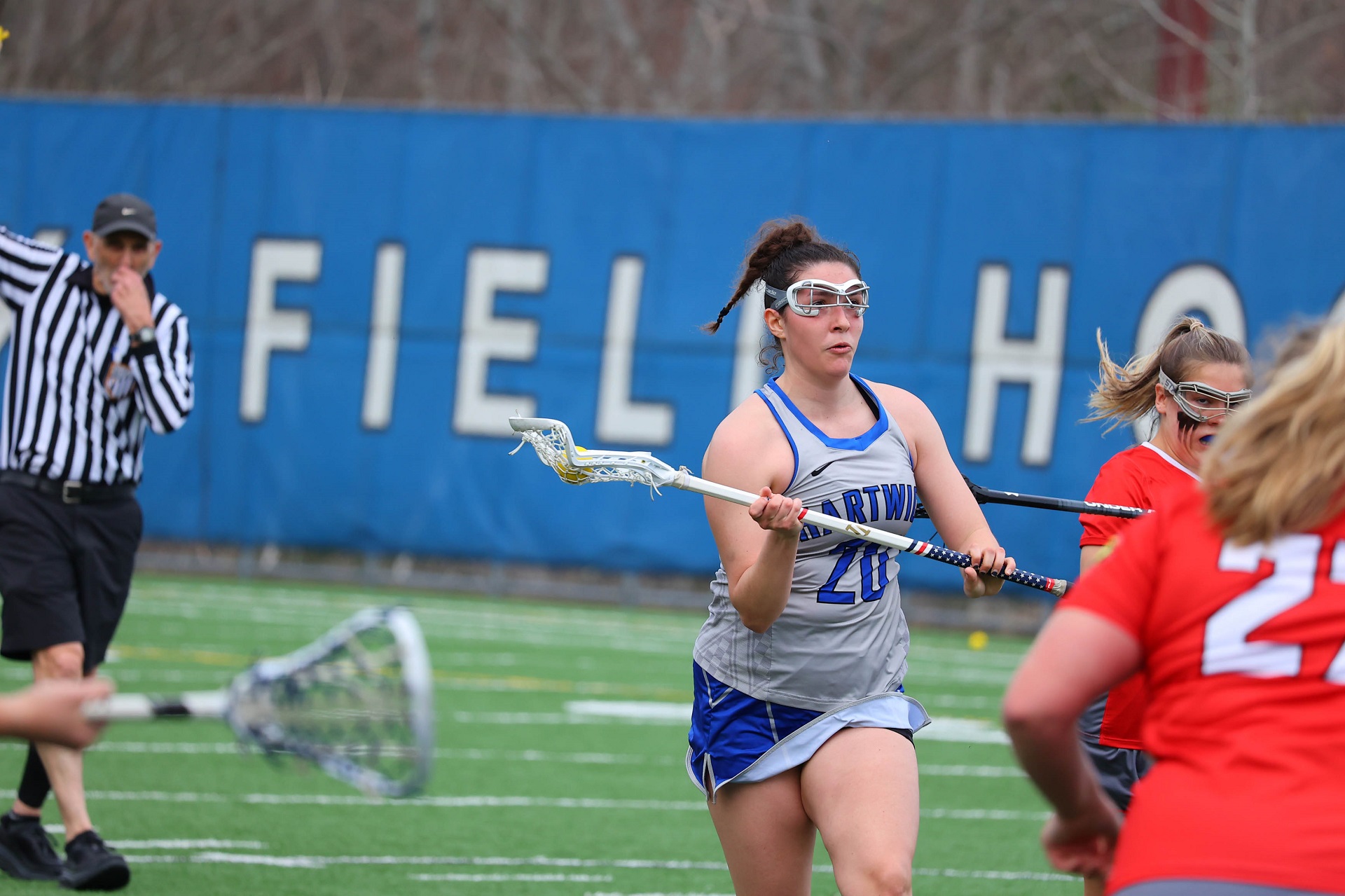